This gang is so good and Harmonica Sam is part of the Enviken family.

No, you’re right this is not an Enviken Records release but as Harmonica Sam is part of the Enviken family ever since we released his first album “Rocker #1” we felt that we need to support the man!

And as it ain’t that easy to ge a hold of these releases here in Sweden it’s a no-brainer really!

Well, it really doesnt matter where you live, if we can help spread the word to every corner of the planet than it’s just great!

These fellers delivers some of the best Honky Tonkin’ Country tunes I’ve heard in decades. They just make me proud being a Swede!

The new album from “The Country Side Of Harmonica Sam” called “A Drink After Midnight” will be in stock at the end of next week if the postal services keep their schedules. Hopefully no later than the 12:th of May, will ship sooner if possible!

It will be available on both Vinyl and CD and you can pre-order it in our webshop now. 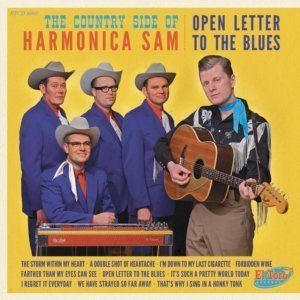 It is also available on both Vinyl & CD.

“Friends, and that’s what we are in this musical family in search of honest songs sung by honest singers backed by honest musicians. The Country Side of Harmonica Sam are honestly that REAL HONEST MUSIC.

I first became aware of them through the nominations for Honky Tonk Band for The Ameripolitan Awards. I loved their music from the get go, but the awards are only for Ameripolitan fans to decide.

Well, they agreed with me and now the band is certainly a major part of the Ameripolitan Family, Original Music with Prominent Roots Influence.

Harmonica Sams vocals on True Lies are reminiscent of Webb Pierce crossed with Wynn Stewart. The band is tight and confident and settle around Sam’s vocals like warm whiskey. Their originals are such natural progressions, drawn directly from their musical influences, yet obviously make their own individual sound and style.

That’s HONEST. So sit back and get ready to take a musical journey reminiscent of yesterday and straight into the very bright future of….. The Country Side Of Harmonica Sam”  // Dale Watson

Once again, I’m proud to offer this music to you folks, some of you may not like Country music but that’s just the way it is, we all have our musical preferances but if I can make only one of you discover a new favourite artist than I’m happy!

10 newest items in the store

By continuing to use the site, you agree to the use of cookies. more information